The cut/fill comparison toolset allows you to quickly compare the elevation of one map to another map or to a design surface (grading plan). With heatmap visualization, you can easily identify where soils have been cut or filled from one map to another or how much soil needs to be cut or filled to reach design grade so that you can track changes and monitor the progress of earthmoving.

With volume measurement comparison, you can quantify the amount of earth moved -- either for an entire site or for individual volume measurement, like a pit or stockpile -- so that you can verify subcontractor work, manage stockpile inventory and better keep to a project schedule.

How to Visualize Cut and Fill

You will see a new layer available in your projects called “Cut/Fill”. When you select the layer, a red/blue heatmap layer will appear on top of the map you are viewing which shows the elevation difference between that map and another map within the project.

The zoom level of your Cut/Fill surface is affected by the resolution of your Geotiff. If you notice you cannot zoom past the Cut/FIll layer after a certain point you will want to upload a higher resolution Geotiff.

When comparing Cut & Fill on a project, we allow you compare to a previous date, or a design surface.

The Total Volume is the FILL + CUT

If you want to know how much material you have moved in total, that is the Total Volume

The Net Volume is the FILL - CUT

If you want to know how much material you have imported to or exported from to your site, you would look at the Net Volume. It will be negative if you have exported more material than you imported in total.

When comparing to a design plan, cut and fill are expressed in terms of what would need to be cut or filled to match the later state or design plan. You can think of this as "proposed cut" and "proposed fill". For example, areas, where my map is higher than the design plan, would be colored red for "cut", meaning that earth would need to be "cutaway" to reach design elevations.

The below visual is a good representation of this. 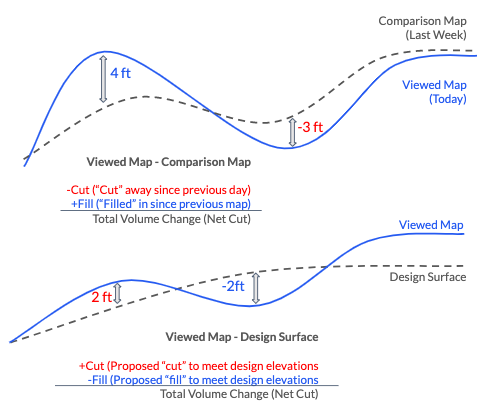 Some sites may involve enormous amounts of earthmoving, changing grades by 50 feet or more, while others may only involve grading changes of a few feet. You can adjust the cut/fill layer to focus on the range of elevation change that matters to you. This is the minimum and maximum values beyond which cut and fill will appear as either solid blue or solid red. If your site has only small grading changes, you will want to decrease the visualization range. If your site has very large grading changes, you will want to increase the visualization range. 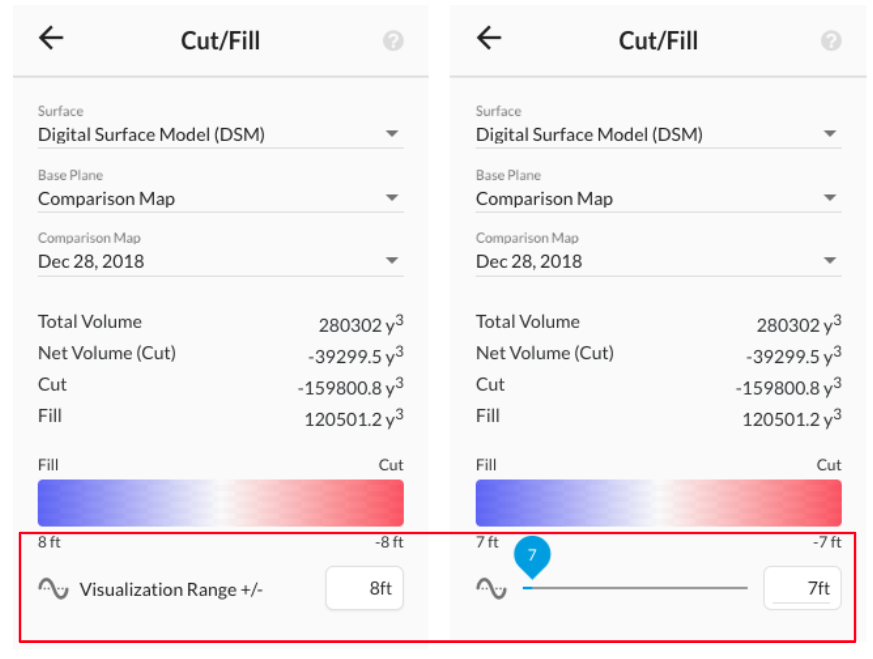 Comparing the Elevation of Two Maps

By default, the heatmap will show the elevation comparison between the map you are viewing and the previous map within the project, but if you would like to compare to a different map, you can select a different one from the Cut/Fill details page. 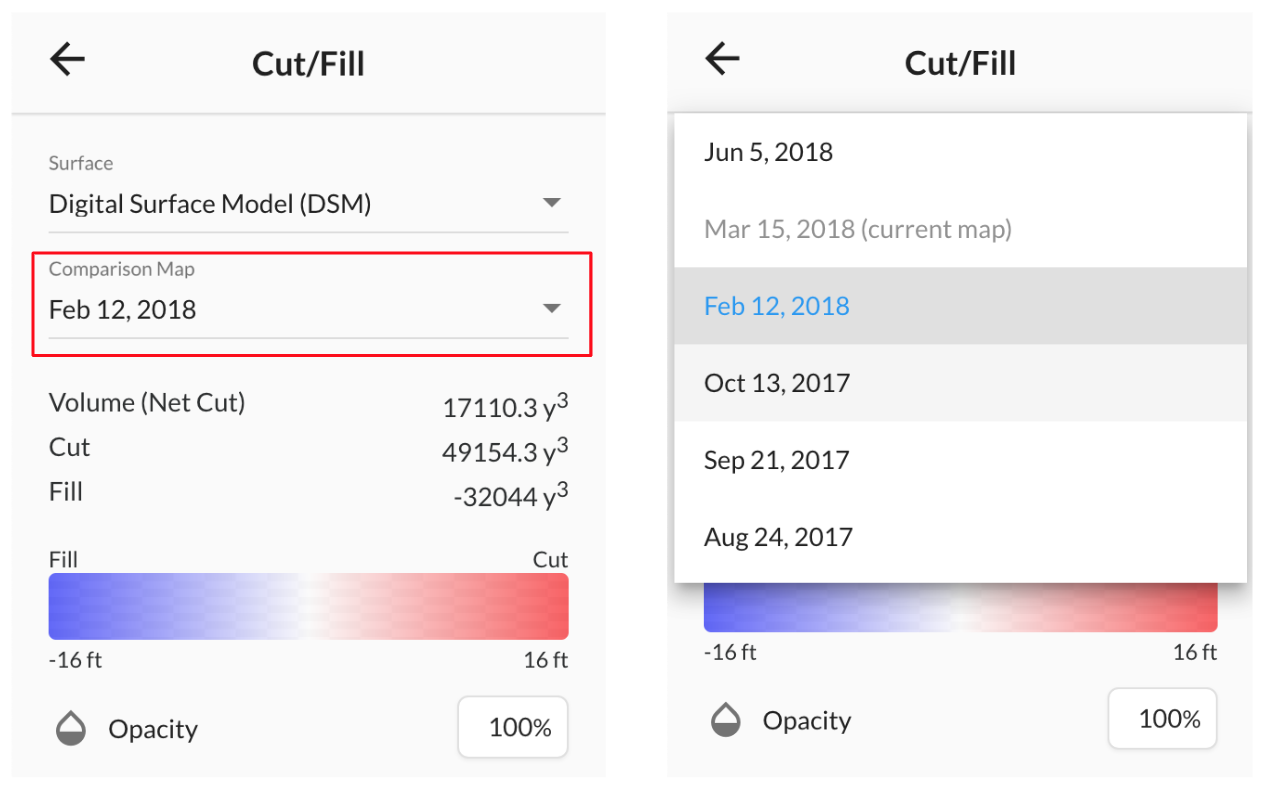 Keep Your Comparison Map in Mind

Upload the design surface of the final elevations for your project once, and then compare against each drone map to see how much earth still needs to be moved. Just click the "Add" button next to "Project Files" and select "Design Surface". Then upload your design surface as an Elevation GeoTIFF. 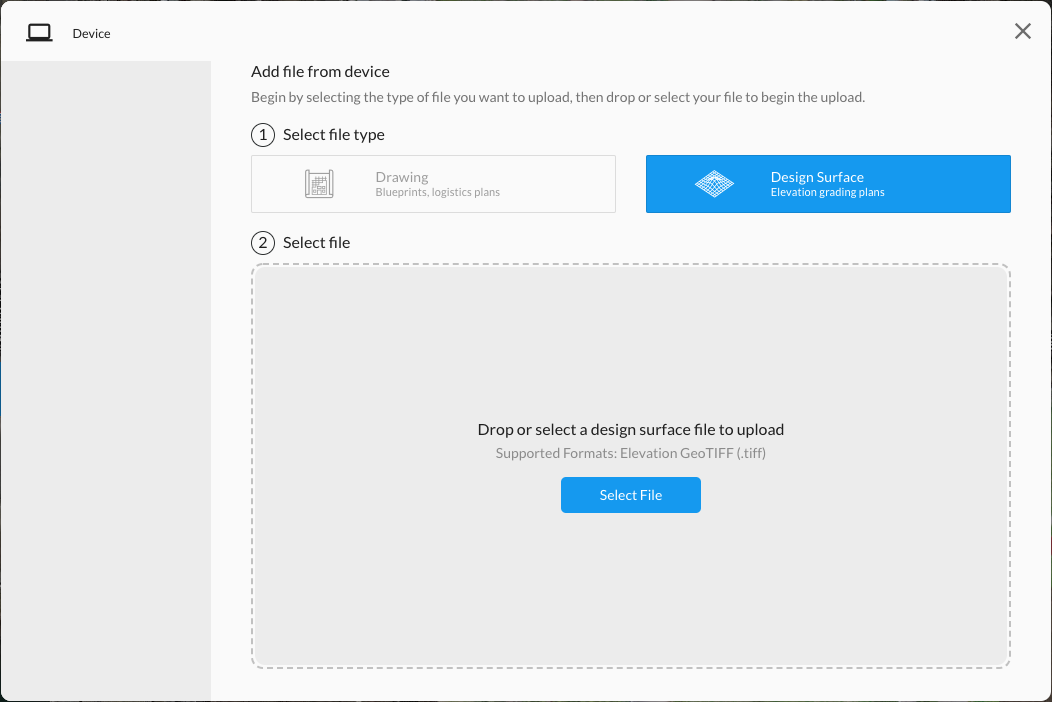 How to export an Elevation GeoTIFF

Here's a support doc explaining how to export this file type from Civil 3D. Make sure when exporting that the tiff is geo-referenced with a coordinate system. Otherwise, we will be unable to process it and align it to your maps in DroneDeploy.

Your design surface will take about 10-20 minutes to process. Once processing is complete, you will be able to view it as an elevation layer in DroneDeploy.

You will also be able to select the design file for comparison from the Cut/Fill layer and from within volume annotations.

When you view the Cut/Fill details, you will see the total volume difference expressed as Volume to Cut, Volume to Fill, and Total Volume to move, and Net Volume between the two maps you are comparing (within the area where they overlap). 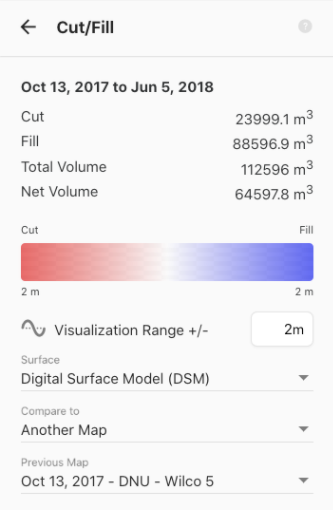 However, the area of overlap may include more than the area of earthmoving that you want to track. To measure the volume difference between two maps within a specific area, you can use the volume measurement tool.

Define the perimeter of the area you want to measure and then select a Comparison Map as a base plane. You can turn on the Cut/Fill visualization layer while you are making your volume measurement to help you see where the elevation is different between the two maps. 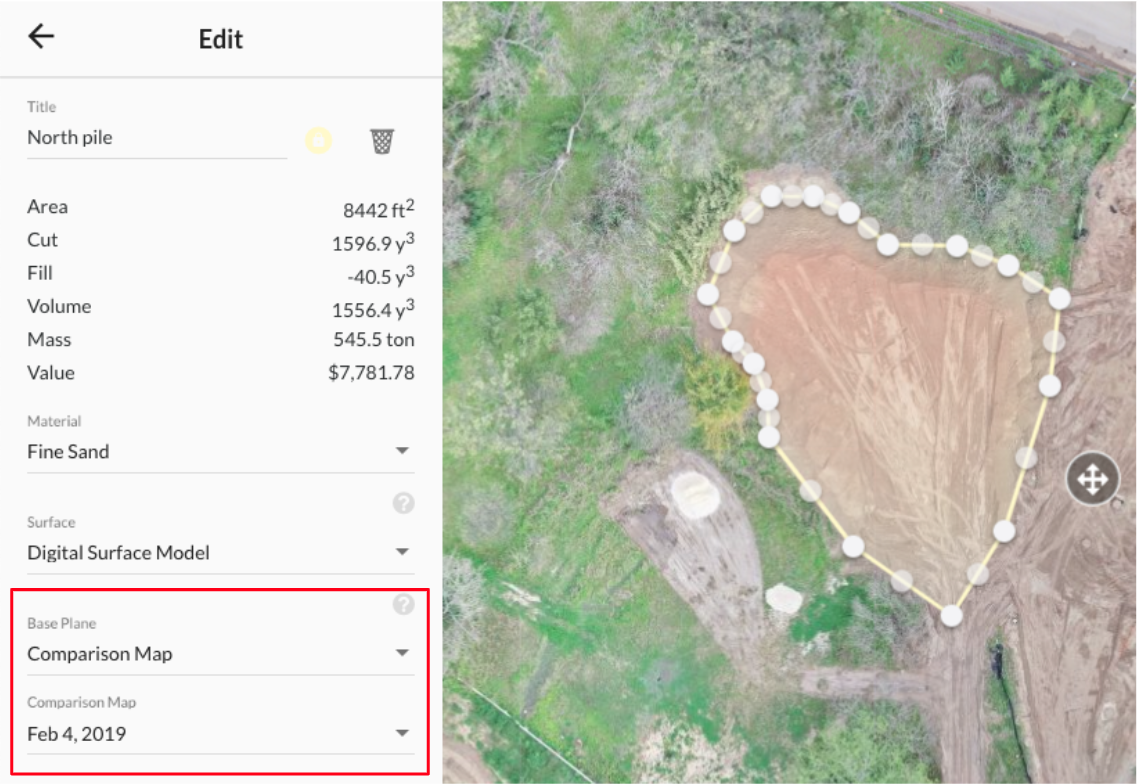 Here's an example of an area of excavation on two different days. When you compare the drone maps and elevation models from each date, you can see that more of the area has been excavated by the second date. 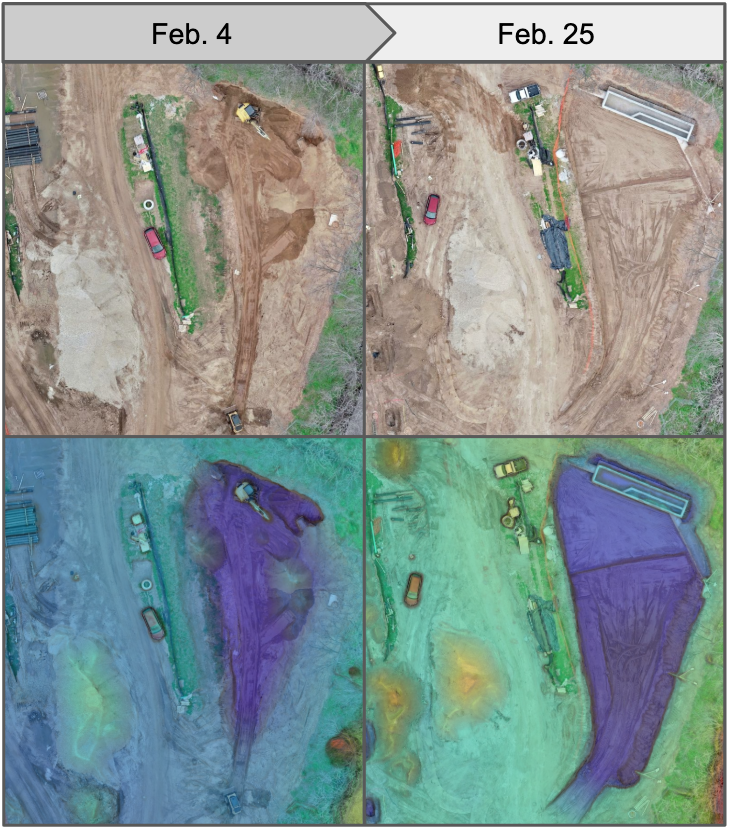 The cut/fill visualization can enable you to visualize the change in just one view, without having to toggle back and forth between different maps dates, and with the elevation comparison, you can calculate that over 1,420 cubic yards have been excavated in that area between February 4th and February 25. 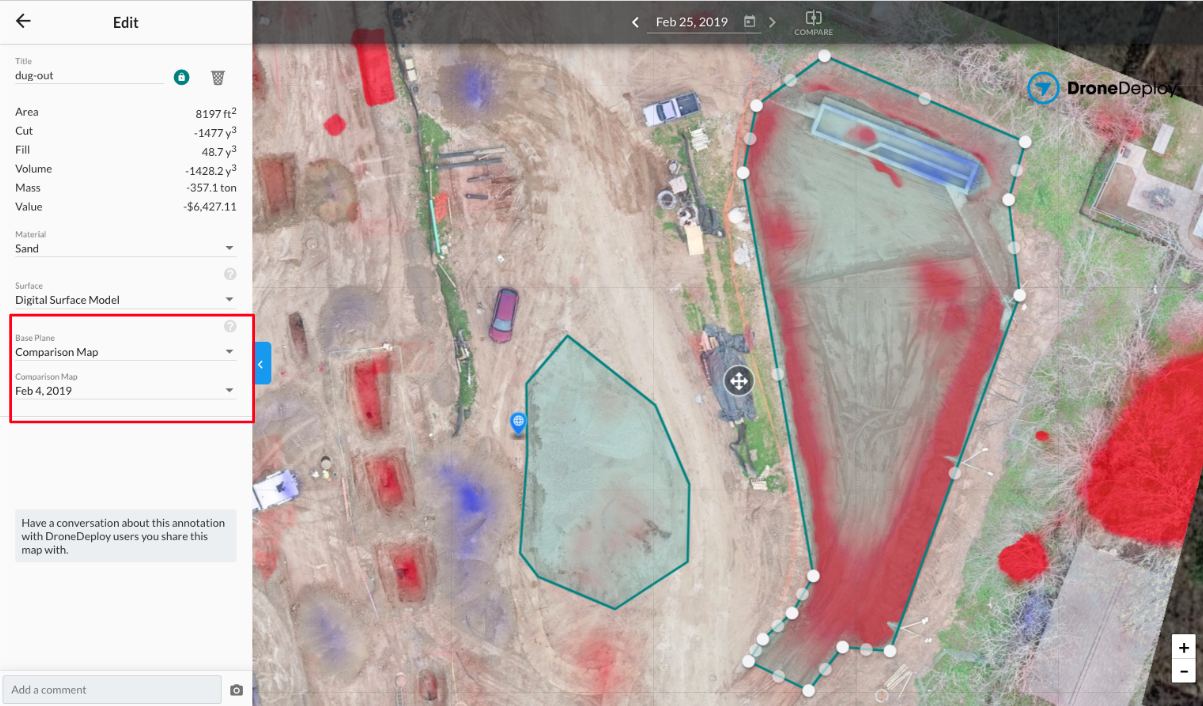 Tolerance can be set for enhanced cut/fill elevation comparison in order to account for ground surface variation picked up by photogrammetry. This is set is + - feet as seen in the GIF below.

With default drone map processing, elevations from map to map can vary based upon the GPS error of the drone and variations in barometric pressure. This means that the elevation of a point that has not moved may have different elevations on different maps of that point -- and this in turn is a problem for Cut/Fill visualization and volume comparison measurements, which use those elevation values.

Map processing in DroneDeploy will attempt to correct these issues and align each processed map to previous maps in the same location, however, especially when comparing maps processed before DroneDeploy began automatically aligning maps at the end of 2018, you may still see significant elevation variations between maps.

Fortunately, there are two ways that you can address these variations. For maps that have already been processed, you can manually correct elevations by using Elevation Calibration to enter the same known elevation at the same point on the different maps that you want to compare. For example, if you know that the corner of the sidewalk is 51.3 ft above sea level, you can enter the elevation at that point on each of the maps you want to compare.

Have ideas for more improvements you would like to see? Please let us know in this brief survey!